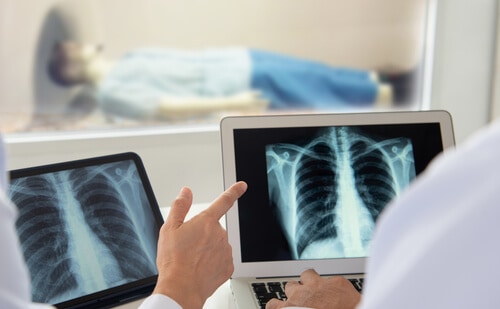 One of the difficulties in diagnosing asbestosis is in distinguishing it from other similar fibrotic lung conditions, which are grouped together under the term ŌĆ£idiopathic pulmonary fibrosisŌĆØ, or IPF. This simply means fibrosis of unknown origin or cause.┬Ā┬Ā

Diagnosis of Asbestosis during Lifetime

During a person’s lifetime a diagnosis will usually be made based on the following five criteria for diagnosing asbestosis:

iii)┬Ā ┬Ā the presence of reticular linear diffuse opacities on the X-rays or the CT scans. This is a net-like pattern and a radiologist or chest physician will identify whether or not that feature is present.

Even if these criteria are satisfied however the difficulty remains that they do not help to distinguish asbestosis from IPF.

The risk of contracting asbestosis is connected with the dose of asbestos that the person has been exposed to over their lifetime.┬Ā

A dose of 25 fibre/ml years is associated with a 1 per cent risk of developing asbestosis.┬Ā

In a heavy exposure case of 100 fibre/ml years the risk increases to about 10 per cent.

The risk of contracting IPF in men over 75 is only 0.16%. The balance of probabilities therefore favours a diagnosis of asbestosis in cases of exposure of 25 fibre/mls years or more.┬Ā

Diagnosis of Asbestosis after Death

If a person is suspected of having died of an asbestos-related illness the matter should be referred to the coroner and a post-mortem will usually be carried out so that an analysis of lung tissue can be done.┬Ā

The lungs will initially be examined by the pathologist to ascertain the pattern of any lung fibrosis suffered. However the problem of distinguishing between asbestosis and IPF and, in particular, the most common sub-type of IPF which is usual interstitial pneumonia (UIP) still exists.┬Ā

More aggressive, rapidly progressing fibrosis will usually suggest a diagnosis of IPF such as UIP is more likely. However, in some cases of asbestosis, the pattern of the fibrosis resembles UIP.

Given the difficulties in distinguishing between the different types of lung fibrosis it is therefore also usually necessary to examine lung tissue samples to try to ascertain the number of asbestos bodies in the lungs.┬Ā Asbestos bodies are fibres that have been breathed into the lungs and which then become coated in iron. The asbestos bodies are highlighted by staining of the tissue samples. There are two types of stain: the first is haematoxylin and eosin (H & E staining); the second is iron staining, sometimes referred to as PerlŌĆÖs staining. Iron staining can highlight more asbestos bodies than H&E staining. It is not clear from the post-mortem whether both of these stains were used in this case.┬Ā┬Ā

The basic test is to examine the stained tissue samples looking for an average of two asbestos bodies per square centimetre of lung tissue under a light microscope.

There have been doubts expressed as to the reliability of an analysis of dry lung tissue carried out at post mortem.┬Ā

Further studies can be carried out on tissue samples that have been treated with chemicals (wet lung tissue) to try to identify more accurately the extent of the asbestos material in the lungs.┬Ā

The results of the tissue analysis will be compared against the range of the laboratory’s results from people who have been accepted as having asbestosis. If the fibre count is above the level required by the laboratory, asbestosis is diagnosed. 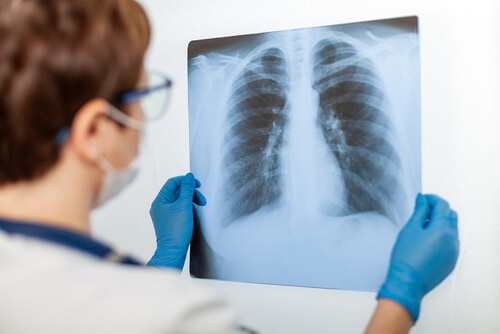